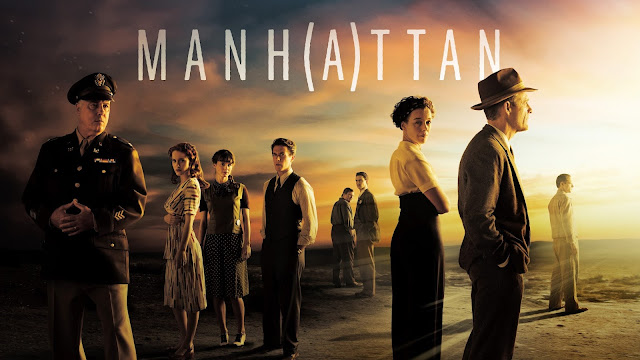 Manhatten is a two-year 2014 series that aired on WGN America about the Manhattan Project.  It is available on Hulu.
I have a low tolerance for shows and movies that distort history.  Often this is done to push a political agenda, where the writers want to spin the past to their liking.  In the case of Manhattan, the show takes place in a kind of alternate universe full of spy scandals and sexual intrigue.  Almost all the characters are fictional having nothing to do with real history.  As such, Manhatten is soap opera disguised as a historical drama.  I am concerned that people might think that these events were real when almost none of them were.
Much of the made-up drama, which is at least half the show, I find boring.  The spy-related stuff is pretty good.  There is some actual science that I find interesting.
Why anyone would want to make a show like this?  Who is the audience?  It is one thing to have fictional historical drama in something like "Master and Commander", but the Manhattan Project was a major historical event that they completely fictionalize here.
The 1989 movie "Fat Man and Little Boy" had mixed reviews, but at least it was more historically accurate.
Posted by John Coffey at 11:16 PM