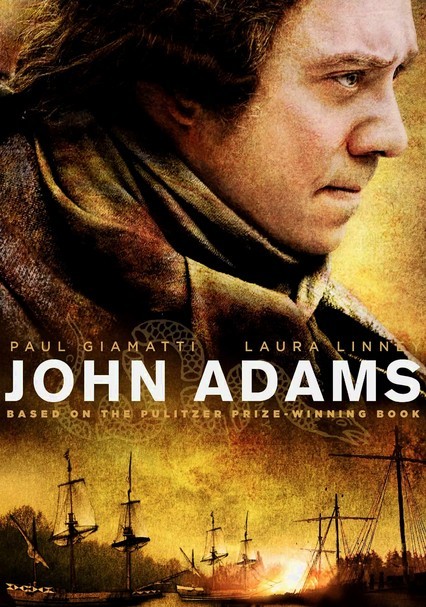 If you like history or historical dramas, then the HBO miniseries John Adams is a feast of historical drama.  It is essentially an 8 hour movie about John Adam's life.  The performance by Paul Giamatti as Adams is great, and I am delighted by the performance of Laura Linney as Abigail Adams.  The supporting performances are also really good, although I wondered about some of the casting choices that didn't seem quite right to me.  There is David Morse as George Washington, Danny Huston as Samuel Adams, Tom Wilkinson as Benjamin Franklin, and Rufus Sewell as Alexander Hamilton.  I have seen all these actors in very different roles, usually playing villains or less than likable characters, so all of them being cast as the founding fathers of our country surprised me.Benjamin Franklin described John Adams as, "He means well for his country, is always an honest man, often a wise one, but sometimes, and in some things, absolutely out of his senses."  This is the essence of John Adams; his passions got the better of him.  History relegated Adams to a back seat compared to the other founding fathers, but he was one of the most passionate about Independence and a driving force behind the American Revolution.  He was a very serious man, which is why his commission to France in 1777 didn't go well.  Franklin arrived before Adams and knew how to fit in with the fun-loving and relaxed French aristocracy, but Adams felt completely out of place and kind of looked like a fool compared to the more suave Franklin.
The politics of the early United States immediately divided into two factions that became separate political parties.  Jefferson wanted a limited government with an emphasis on freedom.  Hamilton wanted a strong federal government with a powerful central bank.  Although John Adams sided with the Federalists, his actions were more moderate and he tried to stay in the middle of the two sides.  During his tenure as President, both sides were eager to get involved with the war between France and England, with the Jeffersonians siding with France, and Hamiltonians siding with England.  To John Adams' credit, he struggled against both sides to keep America out of what he thought would be a disastrous war.  This was to his detriment because he lost his 1800 reelection bid to Jefferson.
Adams and Jefferson started as close friends.  However in the 1800 election, Jefferson went out of his way to attack Adams' character, so the two men became estranged.  In their retirement, the two men wrote to each other and their friendship blossomed again with 14 years of correspondence.  Both men died on the fiftieth anniversary of the signing of The Declaration of Independence.  Adams' final words were, "Jefferson survives", but he did not know that Jefferson had died a few hours earlier.
The miniseries kept its cost down by mostly showing events from John Adam's perspective.  A more theatrical version would have shown the many battles of the revolution, but this series bypasses most of that.  This has the advantage of keeping the story on a more personal level.

I have a low tolerance for historical dramas that rewrite history.  In the second episode, there is a "tar and feather" incident that is completely fictional.  The scene is there to emphasize the passions of the American Colonists against the British occupying forces, but there should be no need to make up history.

Fortunately, the entire miniseries works as a great drama with much interesting history thrown in.