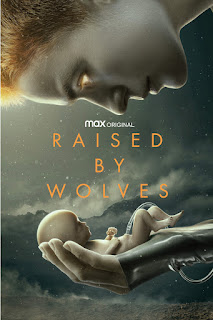 I want to talk briefly about the HBO series Raised by Wolves available on the HBO Max streaming service. On HBO Max, I couldn't tell how many episodes there are, or even if there is more than one, which is a problem I think with their service. I had to look the show up on Wikipedia to find out. I thought that maybe it was a two-hour movie, but the first season has 10 roughly 50-minute episodes and a second season is also planned.
The premise is that after a religious war has destroyed Earth, two androids, called Mother and Father, land on Keppler-22b, which is a real planet about 60 light-years from Earth. They start a settlement using human embryos to create several children. Unfortunately, only one survives. The androids do not believe in religion because they were created by the atheist faction of the war, but their settlement is threatened by the religious faction when a large ship called an "Ark" arrives and also wants to settle on Keppler-22b. The two sides are immediately in conflict with each other. It turns out that Mother is also a powerful and very deadly war robot.
The first episode sets up the premise so slowly that I was thinking that I wasn't going like this show, but when the religious faction shows up things get going in a big way. The way the story is presented, neither side is particularly evil, but the two sides just don't get along. (If they would just agree to live together then there wouldn't be much of a story.)
I think that the show follows a formula that makes it very addicting. The series is mostly a soap opera, which is true of many science fiction shows, and this drags out the story, but every episode has one startling revelation and some sort of cliffhanger. This couldn't be a more addicting combination. They give you just barely enough story in each episode to keep you wanting more. Sometimes the plot seems thin, but it is the kind of series that makes you want to binge-watch. Since the show also has many flashbacks, the format is similar to LOST.
--
Best wishes,

http://www.entertainmentjourney.com
Posted by John Coffey at 1:16 AM