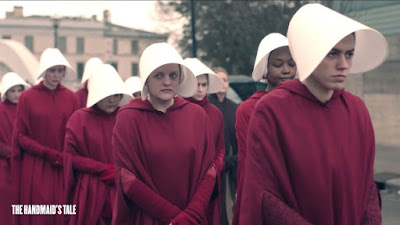 One reviewer said, "The Handmaid's Tale continues to disappoint." I disagree. The final season of the series is slowly building to something, very likely something big. The most recent episode was called "filler", which it might have been, but every single episode has moved the story along at least a little bit. Meanwhile, the series gives us a great many dramatic moments along the way.

It is interesting that people complain that Season 2 was too dark and too violent. How could this show be any different? Almost everything bad that has ever been done to suppress women is in the show. It should make whatever payoff that is coming all the more dramatic.

In Handmaid's Tale, Elisabeth Moss plays June, who is very intelligent, angry and very intense. I just saw a couple of interviews with the actress, where in person she seems more like Drew Barrymore. Maybe not completely, but there is quite a difference between the actress and the character she plays.
https://www.youtube.com/watch?v=MpWtif_VTzI
Posted by John Coffey at 12:01 AM