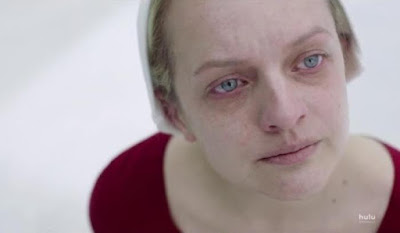 The Handmaid's Tale (on Hulu) continues to impress. The latest episode, Season 3 Episode 9, called "Heroic", is maddening throughout most of it as the main character is forced to endure isolation leading to her own madness. The acting by Elizabeth Moss here is just terrific, and the supporting cast is great as well. The emotion we feel at the end is strong, and a good payoff for an otherwise trying episode.

There are only four more episodes to go. They promised us a revolution in the preseason publicity, but the show is taking a very long time to advance the narrative even a little. Instead, it meanders on little side stories that feel intensely personal. It appears like they don't have enough time to bring the series to a proper conclusion.

Previous episodes repeatedly referenced a war being fought in Chicago. This might be the key to how the series ends.
Posted by John Coffey at 12:08 AM